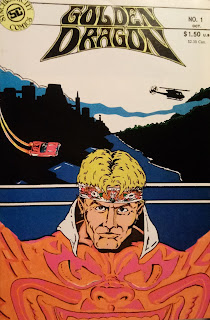 It is just before dawn in the far off future year of 2019 when our hero Randall Gold parachutes down into the southern region of Chile. 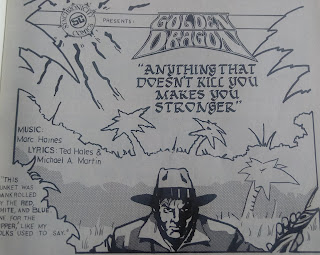 Gold quickly finds his way into a local watering hole to meet his contact, Ortiz. But suddenly one of the local women seems to take a liking to our man Gold! 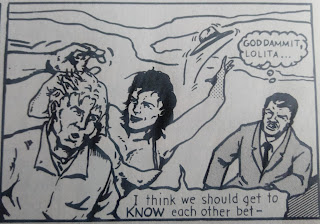 When Lolita's "date" decides she is giving too much attention to this American he smacks her around. Gold doesn't like this one bit and starts brawling with the scum bag! Gold gets shot in the ensuing chaos and runs out of the saloon to find a place to hide before his cover is blown.

As he's laying low in the jungle he is reminded of his first tour of duty in Chile back in 1998 when he was merely eighteen years old. He and his platoon were mowed down by the enemy and Gold was the sole survivor! 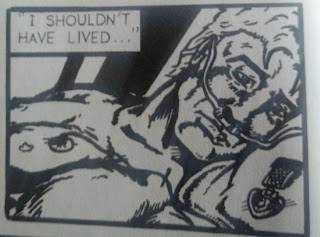 He trained back to health and moved to San Francisco. It was there he stumble into an alley to see an old man in a bowler hat getting mugged by some punk rock hooligans. But this old man was too tough and instead of playing the role of victim, he turned the tables on the punks!

Gold was so impressed by this shriveled old fella's ass kickery skills that he asked to become his pupil. And luckily the old man agreed! 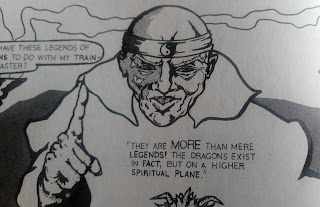 One day during training, the sensei told Gold he was ready to be instructed in the ways of Dragons. The Dragons of Old China represented the balancing forces of the cosmos. The White Dragon was Good, the Black Dragon was Evil and the Grey Dragon was the balance between the two. 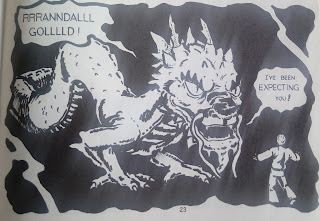 Randall Gold soon found himself facing the White Dragon!
The dragon warned our hero of a great evil descending upon his world. An evil only he can stop! He goes on to allude to a power within Randall Gold that he will eventually recognize and use against the forces of evil. He is the world's only hope!

After Randall awoke from his vision, he found the sensei had disappeared. Randall wasn't sure what to do with himself so he turned once again to the army. Randall was offered a part in a special Army project. He agreed and was instructed to visit a secret lab. Once there he was told of a project called A.L.I.C. 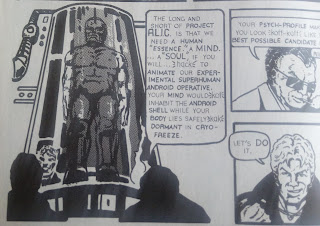 Inexplicably, Randall knew this project would awaken the power that the White Dragon had spoke of  which waited inside of  him. A power he was surely about to unlock! So without hesitation, Dr. Nils Reinhold began the procedure. The effects were staggering! 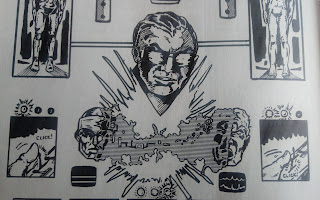 Randall Gold's essence was transferred into a metal body. A body that possessed more power and endurance than that of a mere mortal. That is why he wasn't seriously injured by the gunfire at the bar earlier in our story... Randall's a damned robot!!

Randall walked off into the night to prepare for what awaits him in the jungles of Chile the next morning. And we are treated to a slow pan away from the jungle and into... the moon?
Okay, whatever. 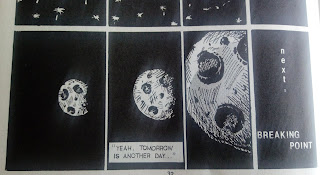 The back cover is sweet. It totally reminds me of the opening screen of some old NES game that never was. I can see it all pixeled up with that cheesy old eight bit music playing behind it. I love it! 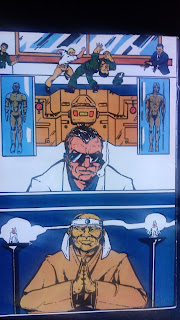 Speaking of  cheesy graphics, here is my version of the Sensei about to kick the punks' asses with a  little help from his pal the White Dragon! 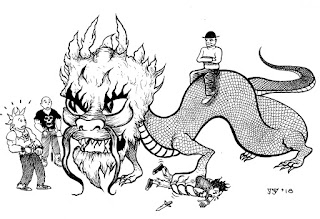 Pretty fun comic that had lots of '80's staples like martial arts, punk rock baddies, robots and military action... what's not to love about that?!

Unfortunately it looks like there was never an issue two of the series so we will have to guess for ourselves what adventures await our hero, Randall Gold.

But just in time for Halloween I will be reviewing this treasure in a few weeks here at the Bewildering. Don't miss... Lethal Lita! 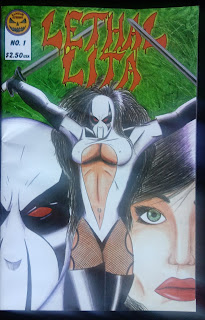 Posted by Veggiedogsaturn at 8:02 PM