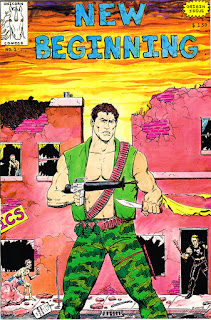 It's the fourth of July 1988 and Terry's mind begins to wander as he lifts weights in the rec room of his mansion. He's preparing to host his high school graduating class's ten year reunion. He lets his mind drift back to his teenage years when he wasn't the svelte hunk 'o man he is now. Instead he was an out of shape loser that everyone made fun of.
He thinks about the time he was pushed into a swimming pool by Curtis, the boyfriend of his secret crush, Debbie Clark. Everybody laughed except for Debbie. She just scolded Curtis for being such a jerk. It was that day Terry decided to make some changes in his life if he ever hoped to win the heart of the angelic Debbie. He joined the army and got his ass in shape!
Continuing his workout, Terry's mind flashes forward to one day in 1983 when he and his army buddy Al were in Grenada. They had gottten separated from their squad and happened upon an enemy patrol. Al and Terry opened fire and the patrol surrendered. Our boys decided to have some fun with their prisoners and made them get on their knees and pose for pictures... classic!  But one of the prisoners had enough of this humiliation and spit in Al's face. 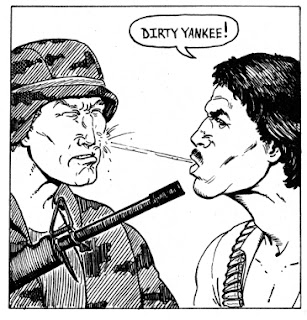 Al is kind of all Full Metal Jacket crazy so he opened fire on the guy, basically blowing his head clean off and then he turned his rifle the other prisoners and eventually toward his friend Terry. But luckily Terry shot first and Al's dead body hit the ground.
The government covered up the incident and Terry's time in the service passed. Just before his discharge he got news that his parents and grandparents were killed in a plane crash.
He and his brother Gerry each inherited eleven million dollars from Gramps.  Gerry took his money and disappeared. Terry used his part to build an eight million dollar mansion in the middle of the country.
We then flash forward to the present as Terry finishes working out. His guests are starting to arrive! The party gets going and boy can these white people dance! 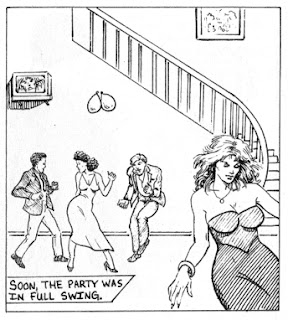 Terry, playing the good host, starts to mingle and asks around about Debbie. He finds out she married that jerk Curtis that pushed him into the pool all those years ago! As if on cue, Curtis and Debbie walk up to say hello to Terry. Curtis is already wasted and makes an ass of himself.
Curtis goes to get another drink and Debbie apologizes for his rude behavior. Suddenly a news report cuts into the television program they're watching and informs them World War III has just started between the U.S. and Russia.

Fearing impending annihilation might put a damper on the party, Terry takes a few of the guests aside and informs them he has a secret bunker under the house and they should follow him to safety.
Now, at this point I think this would be a much more awesome comic if we found out Terry had orchestrated this whole thing as a social experiment. Like, he paid some actor to read a fake news report in order to get some party goers to follow him down to the bomb shelter where he forced them to live with him under the ruse of a nuclear war happening above. Man, that would be an interesting comic series.
But no, this shit is real. Terry's house has over two hundred guests but the bomb shelter can only harbor ten. So he discreetly leads a few guests to safety until this end of the world thing blows over. Unfortunately, Curtis the douche bag is the last one in the line and decides to sneak some booze from Terry's bar before he heads down into the shelter. 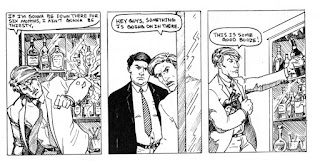 Some other party goers see him and follow him to the opening of the shelter. They know! Suddenly a mob begins to rush the stairwell to the shelter, trying to force their way to safety. I don't know why Terry even invited Curtis into the shelter in the first place. Kind of a boneheaded move if he was hoping to steal Debbie away. If you're gonna be trapped in a bomb shelter with a girl you're trying to romance you should probably not invite her fella along. Just sayin.
Anyway, Curtis smashes a bottle over one guy's head and leaves him there to bleed out on the stairs. The advancing mob tramples the poor bastard underfoot as they try to force their way into the shelter.
Terry decides he's going to have to take control of the sitch and does what any of us would do... he grabs an automatic weapon and opens fire on all of the party goers as the come down the stairs! 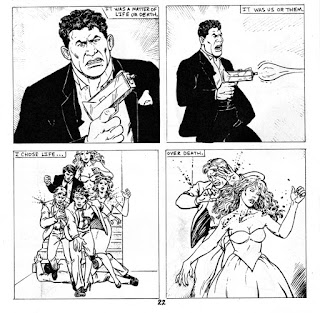 He then seals off the entrance and locks up all the weapons except for his own. He grabs Curtis and slaps him around, telling him it's all his fault that he had to kill two hundred people in his own house. Terry threatens him that if he does anything else out of line he's kill him too! They turn on the television set and see that bombs are falling. Everything's fucked.
Months pass and tensions mount. I mean, seriously... these people showed up for a party and ended up trapped in an underground shelter with the guy that just killed ninety percent of their graduating class. Awkward!
So there's no sign of life on the radio. They just sit down there playing cards or whatnot for months hoping Terry won't snap and kill them all. Then one night Curtis gets an idea. He sneaks up on Terry and steals his gun! I'm actually okay with this move. If it was me I'd be way more scared of Terry than Curtis. I mean, they're both assholes, clearly, but Terry is a trigger happy musclebound psycho and Curtis is just a fuckin' drunk. 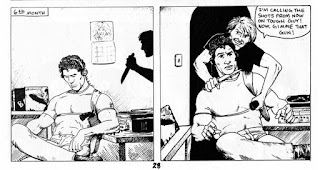 Curtis tells Debbie to grab the stockpile of food so they can take it and leave the others to die. She says she won't do it, and Curtis lays the smack down. 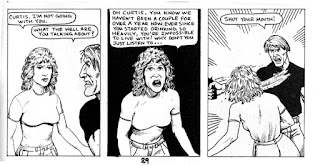 She agrees to his plan but instead of grabbing the food she snatches a pistol and blasts Curtis in the chest. Go Debbie! I love the following panel. Reminds me of Raymond Pettibon artwork. 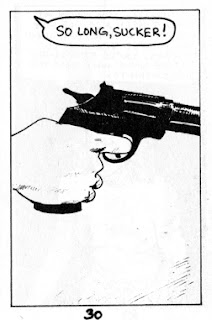 So Terry says the danger in the shelter is over, but they'll have to venture out soon as they will need to restock on provisions of they expect to survive much longer in the shelter. In the coming weeks the radiation levels seem to have dropped and it is assumed that it will be safe to venture outside! Terry and another dude decide to peek their heads out and see what they see.
But when they do they find a pack of bloodthirsty dogs chewing on the remains of the party goers Terry murdered all those months ago. Gross.

And that's the end of issue one! Wow. Insane! So, I did this drawing of Curtis grabbing some of Terry's booze. Curtis is a terrible person but I gotta admit I'd have nabbed some hooch too if I thought I was going to have to live underground for months while the world was ending outside. So here's my pinup of good ole Curtis the drunk! 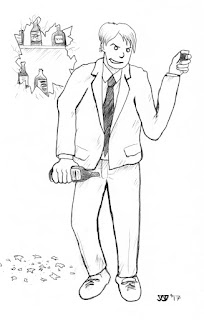 That was certainly the most violent thing I've reviewed thus far. But honestly not a bad first issue to a series and I'd probably read more. And as luck would have it, I can! I have issue two of this thing! I haven't read it yet but here's a preview from the back cover of issue one: 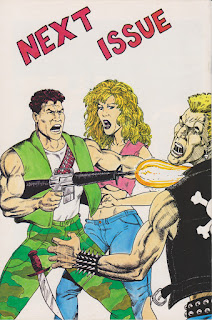 I hope you've enjoyed this one and that you'll come back next month for another wonderfully bewildering comic. Join me for... 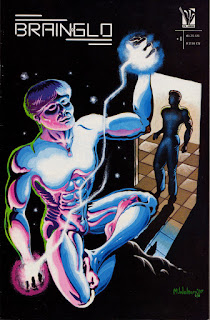 Posted by Veggiedogsaturn at 5:00 AM 2 comments: