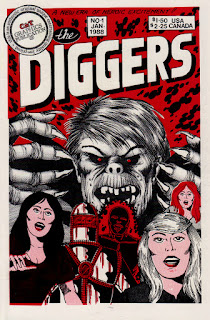 Welcome to the first official post for The Bewildering! Each month I'll review an oddball comic book from my personal collection of micro press weirdness... just for you, loyal reader. Just about everything you'll see here is something I found in a dollar box at various comic shops or conventions...like, for example, The Cincinnati Comic Expo.

Last month I visited that show and, to my extreme pleasure, it was a hot spot of comic book strangeness. I don't remember the vendor's store name, but they were a nice couple from somewhere in New York (perhaps Rochester?) that had so many great gems that I was literally shaking with excitement upon having made my purchases. One of which being the book we're about to dive into here together... The Diggers #1!!

Our story opens with five archaeology students conducting an investigation at the base of a mountain which recently underwent intense seismic activity. Jay and May are off doing some digging while June, Sky and Oscar are using their sophisticated equipment to study the activity.

Jay and May excitedly walk up, claiming to have found some ancient human fossils when suddenly the entire side of the mountain explodes! 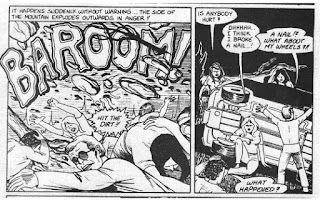 A beast emerges who looks like trouble. Or more accurately, he looks like Solomon Grundy wearing a creepy demon vagina 'round his neck.

We then see the monster meander off toward the city to wreak havoc (as monsters tend to do). Some of our group decide to investigate the mountain, but Oscar notices the Geiger counter indicating huge amounts of radiation emanating from within! End of Chapter One! And, just so you know, all of this happened in just three pages of comic!!

Chapter Two opens with Greyhart walking down a sidewalk getting heckled by passersby until finally he decides he ain't taking no more of their shit and grabs a lady's dog and turns it into dust right before her very eyes! Damn, that's cold.

Back at the mountain, Jay has suited up in an experimental exoskeleton suit that he apparently keeps in the back of the van with the spare tire and reusable grocery bags. Good thinking, Jay! As Jay enters the cave, the rest of the crew decide to stay behind and watch the grisly scene developing in the city via a television monitor in their van.  Some police officers try to stop Greyhart, but he turns them into dust just like he did to poor old Rags the dog. When other cops open fire on the beast, he simply absorbs the energy from the shots and actually increases in size as he does so!

He then leaves the scene, seemingly heading toward the town's nuclear power plant. Fearing he will become too powerful to stop once he's absorbed all the nuclear power, the group decides to try to alter his course. At this point, May inexplicably runs into the cave to check on Jay. End of Chapter Two.

The rest of the gang runs in after May who has found Jay standing paralyzed at some sort of computer console. They drag Jay out of the cave where he reveals that while inside he made contact with  The Pre-Men, a race of Earthlings that lived eons ago. When Greyhart came to Earth way back when he waged war with these Pre-Men who managed to imprison him in the mountain.

Thinking ahead, The Pre-Men set up some kind of fail-safe that should Greyhart ever escape their prison, it would empower a new group of humans, bestowing upon them the means to stop the beast.

The group accepts Jay's wild tale after he show's off his new strength by lifting their van like it was made of cardboard. Oscar also discovers he has the power to turn into energy and back again at will. Neat! 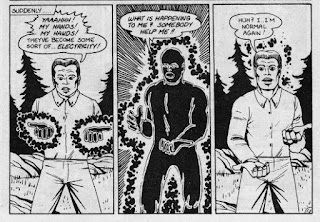 The gang then jumps back into the van and makes their way into the city to attempt to thwart Greyhart. However, their path is blocked by a police barricade (manned by one lonely officer). May rolls down the driver side window and knocks out the poor fella with her mind! End of Chapter Three.

By the time they get to the nuclear power plant Greyhart is enormous! Like, a sentinel from X-men or that fire beast during the opening credits of Spider-man and his Amazing Friends. Remember that guy?

Anyway, Oscar figures out he can also fly and speeds toward the monster. Unfortunately, Greyhart knocks him aside, absorbing his powerful energy and growing even bigger. Oscar uproots a tree and hurls it at Greyhart who effortlessly catches it and turns it into dust.

May turns into a winged demon creature and attacks the monster, clawing at his face and drawing blood. May kicks ass. Still, Greyhart smacks her down and Jay runs to her rescue. Then there is some weird infighting amongst the team as they try to decide who's the leader. June steps in and puts in her two cents and while they're all bickering, Greyhart begins sucking the energy from one of the nuclear reactors, laughing as her grows even more powerful.

June notices Greyhart's transformation and unleashes her powers for the first time, shooting beams "of force and light". The sky blackens and a tornado like vortex of pitch black strikes down upon Greyhart who's just depleted all of the energy from the second nuclear reactor. 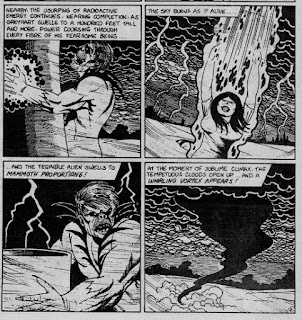 The beast howls as it sucks him up into the sky and destroys him in an awesome display of thunder and lightning! Hot dog!

The group eventually leaves the scene as Sky wonders aloud why she has yet to manifest her powers (if she indeed has them like the rest of her pals). They decide that there may be some greater purpose to their newfound abilities and proclaim they will face their destiny as a team. A superhero team called... The Diggers!

Man, I loved this comic! Seriously... it was pretty great. It actually reminded me a lot of a Mike Allred superhero team like the Atomics. I could totally see him drawing this story and not really changing a thing except putting in poppy retro jargon to make it his own.

The art could use some tightening up in places but overall I think this was a pretty sweet effort all around. I'd definitely pick up issue two should I run across it in my dollar box diving and recommend you do the same.

So, with each one of these reviews I'll be posting my own depiction of one of the characters from the book. For this one I chose May in her kick ass bat form! 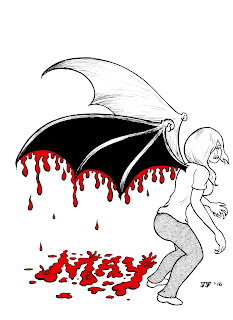 Well, that was a great first pick, I must say! Most of these books I've never read so it's kind of a gamble as to which ones will be fun and which ones will just be a chore to get through. I'm sure there will be some of both on the horizon. Let's just hope the next one is a good one too. Stop back here in a month to see what I think of my next pick: Cosmos #1! 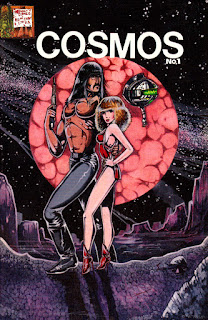 Thanks for reading everyone, and remember to check out the weird comics you've never heard of. You never know what you might happen upon!

Posted by Veggiedogsaturn at 10:33 PM 3 comments:

The Ones That Fell From The Vine

There are lots of good comics out there. Award winning graphic novels like From Hell, Maus and Sandman. There are even plenty of innovative ongoing monthly titles like Saga, Lumberjanes and Paper Girls.

Those books get plenty of well deserved attention in the comics world and their creators have lots of awards sitting on their mantles. And they should. They've made some great comics.

There are, however, some other comics out there that deserve our attention. Comics that will never win any awards. Comics by creators whose names we'll probably never hear in a favorable review.

But these comics tickle a spot deep within me that no National Book Award winner ever could.

These are comics so weird and offbeat, comics by amateur writers and artists clearly working without the hindrance of an editor... comics that are pure rabid creativity and unchecked passion for a medium not yet mastered.

And, luckily for us all, I have a ton of them.

Usually when I go to a comic book convention the first thing I do is plunge into the dollar boxes looking for these peculiar gems. Books like Dark Assassin and The One-Arm Swordsman (the two background images on this blog) that never fail to fill me with joy upon unearthing one.

So, why don't you join me in paying respect to these malformed masterpieces that have slipped through the cracks for months, years, or even decades?

Who knows, the next time you're at a comics convention you just might find yourself scouring the dollar bins. Not to look for an under priced first appearance... not to look for that issue of Batman you need to finish a story line... but for something... a bit more bewildering.


Posted by Veggiedogsaturn at 9:03 PM 4 comments: