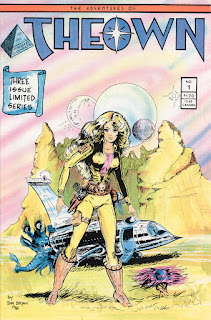 Welcome to the first Bewildering post for 2019! So let's get right into this one...
Deep within the far reaches of space a colossal vessel known as The Infinity makes its way into the unknown. The Infinity was sent from Earth on a 13 billion year journey to reach the edge of the universe. Will it make it there? And more importantly, what will it discover if it does? We'll have to wait for the answer to those questions though. Back to our story... 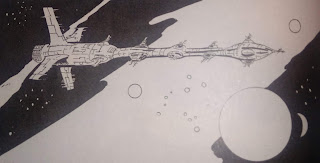 There is no human life aboard The Infinity. It is a fully automated ship however it does contain a treasury of DNA. When the ship's sensors detect an environment hospitable to humans a process is initiated to generate a human from the DNA cache. Also within the ship is an alien life form composed of pure energy known as a Maanum which acts as a guardian for the young humans once they are "born". 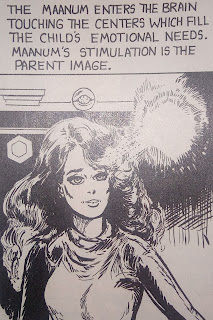 Theown is raised by this Maanum in solitude on the mammoth vessel. She spends her days learning and preparing for her destiny never communicating with another soul save the Maanum.
Then one day something extraordinary happens. The Infinity is barraged with undetected particles whose destructive resonances are felt throughout the vessel. 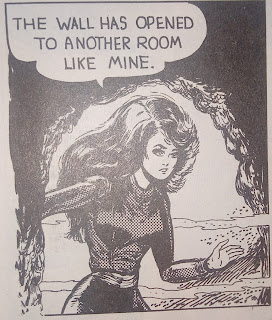 A hole has been blown into one of the walls of the ship. But instead of sucking its lone passenger into the icy void of space it instead reveals a compartment similar to her own familiar quarters. And in it is another person!

His name is Theolast. Both admit they thought they were the only living creature on the ship. They bond over their common arrogance and decide to have a picnic. 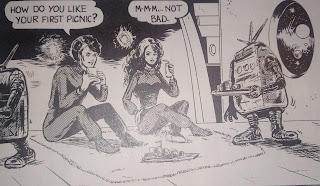 Inevitably the conversation builds around the mystery if even more humans are hidden behind the other walls. Will they ever find out? With their bellies full they decide to postpone trying to find the answer to this burning question and instead just lie down for a nap. But as they slumber the ship begins to enact self repairs. The wall that once separated their respective quarters is rebuilt. 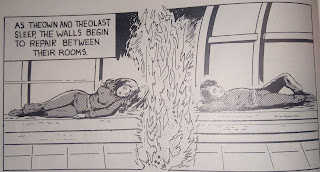 They awaken just in time to catch a last glimpse of one another. The wall once again takes form between them. Doesn't The Infinity know that building walls isn't the answer? Either way these walls are apparently too solid to penetrate. Years pass and Theown resigns that she shall never again see her friend Theolast.

The ship assigns Theown a scout mission to research a water world known as Vrega. Perhaps she will finally break free of the confines of her lonely prison ship!

But as she investigates the alien landscape she finds trouble awaits! 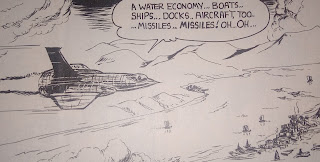 She is shot down by unknown forces and crashes into the vast ocean. Unconscious, Theown's craft sinks into the dark unknown! The frickin' end. 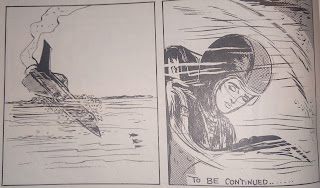 What a cliffhanger! Will Theown perish having only ever met one other human? There are two other issues of The Adventures of Theown out there so maybe we'll find out one day!

I have to admit I didn't love this one. It was a little boring and the characters were pretty vapid. I would've liked to see more scenes of them dealing with the emotional roller coaster of suddenly realizing you're not alone and then having that immediately taken away. Or maybe Theown didn't really care that much for Theolast in the first place.

That said it was a unique little sci-fi story with decent artwork so not a bad read all and all.


Plus the comic also featured an eight page back up story called Flight From Tomorrow by Kevin D. Duncan. It begins with a wizard and a knight fighting in ancient times. Just before they launch their respective deathblows they are zapped into the future year of 1986! 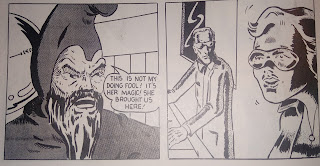 It appears they have landed in some kind of scientific research facility. They decide to put their differences aside to escape this fresh hell. The wizard casts spells to distract the scientists and the knight slays the security guards as they depart the facility. Outside they agree to withhold from slaying one another until they can find their way back home. 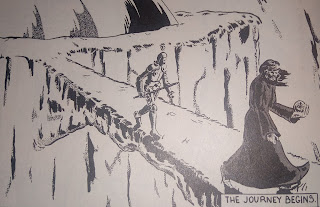 I've always liked unlikely duos and fish out of water scenarios so I decided to do this month's portrait of our friends the knight and wizard as they deal with the wonders of '80's life! 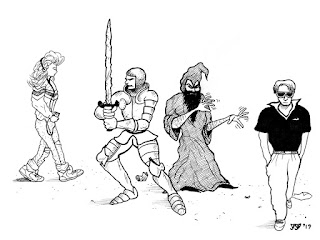 Make sure to check back in a month to see what wonders await in the next installment of...
the Bewildering! 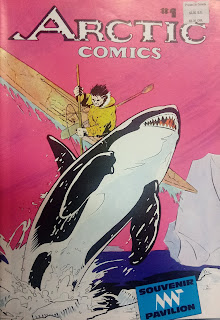 Posted by Veggiedogsaturn at 8:28 AM No comments: