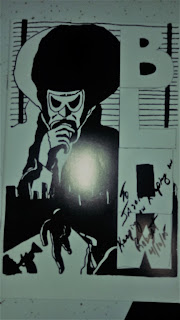 This book is all kinds of special. Firstly, because I met the guy who did it. Robert was at S.P.A.C.E. (The Small Press and Alternative Comics Expo) in Columbus, Ohio in 2005 selling copies of Blow and I purchased one from him there. As you can see in the above image he autographed it to me with the quote "Keep on keeping on". Damn good advice if you ask me.
So, I love this cover. It's what attracted me to the book in the first place. I have always had a fondness for black and white artwork and this image of Big 'Fro Brown cooly scoping out the scene that is playing out in front of him is a great one. 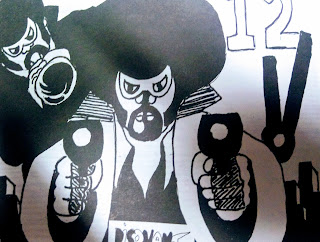 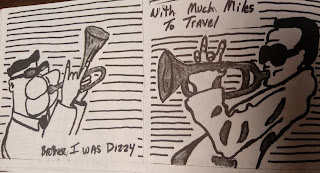 Once I began reading this comic it quickly became clear that it's not your regular story. It's very reliant on imagery that connects in odd ways and has a habit of showcasing images of people playing horns and trumpets and firing pistols in an odd back and forth way that seems to work for some reason. I've never thought of guns and instruments as at all similar (one I love and one I hate) until I read this comic. 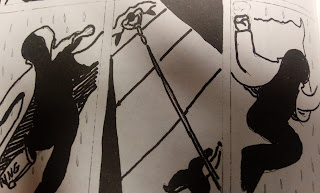 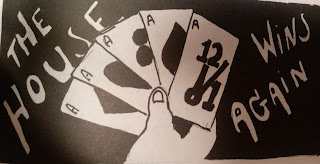 So, there are four short stories in this comic all featuring our main character Big 'Fro Brown. The first one 'Playin' Between the Lines' is just a three page introduction that gives us a peek into his world. It's all guns and jazz, card games and dames. A jazzy noir, if that doesn't sound too pretentious.
The second tale, '61-49 Mississippi Ave' just seems like an homage to the music Robert loves with nods to Miles Davis, Dizzy Gillespie, Count Basie and Robert Johnson. It's not really a story so much as a poem and a love letter to jazz and blues.

'Sketches of Darkness' is our third tale and the one with the most action. It involves a shadowy figure who follows our hero Big 'Fro in the rain and tries to gun him down in the streets. Big 'Fro finds refuge with one of his women who has an apartment over the Onyx Inn. He lays low with her for awhile and then when he is again accosted by the shadowy figure he manages to escape by simply stepping out of the panel, leaving the mysterious gunman alone and confused. 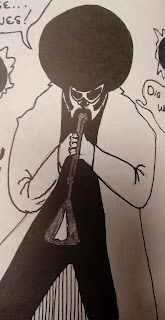 In the final tale, 'Disonant Notes', Big 'Fro speaks about the music on his mind as we're treated to imagery of women and jazz clubs. Another poem style comic instead of a linear story.
Even though I usually prefer a story in comics I believe this one works a bit better than most abstract or artsy comics I've read simply because of the jazz theme. I have been a fan of jazz, particularly Miles Davis, since my friend Terry Means first played 'Live Evil' and 'Bitches Brew' for me back in the late nineties. Jazz is an odd genre of music in that it has a start and a finish but the way it gets you from one point to another is often done in unexpected and unique ways. Blow does the same thing in the form of comics and I think it works. 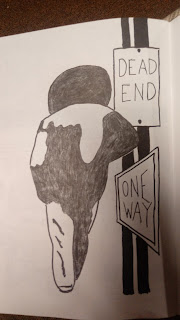 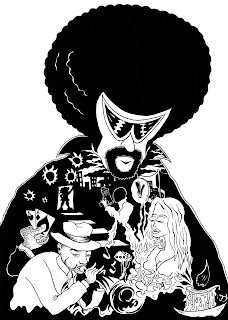 I enjoyed this comic and have no idea if  Robert made any more. I can't find anything about him or this book online. Let's hope he's still keeping on!
Join me next time for what looks to be a real treat...
STORMBRINGER! 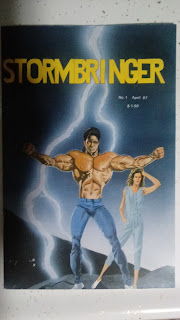 Posted by Veggiedogsaturn at 1:00 AM 4 comments: