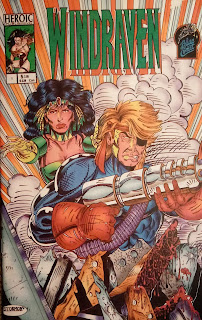 There are so many creators credited because there are three stories about Windraven and her team in this debut issue... so let's get started!

The first story in this comic is called The Healing and it opens with Windraven and the Rough Raiders fresh off a mission returning to their lair for much needed rest. 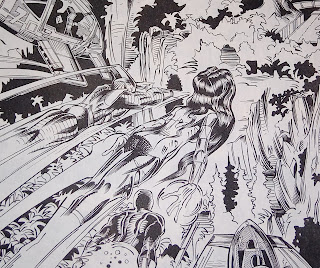 Unfortunately, rest isn't in their future. Their team mate Long John who suffered severe wounds on their previous mission isn't doing well and is going to die unless they can find a way to heal him. 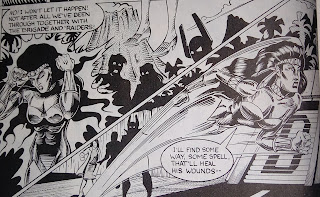 Although Windraven rushes to his aid her sacred life crystals seem to do no good. She realizes it's because John is only half human and her Earth Magic therefore has no effect!

Suddenly one of the Rough Raiders remembers he has heard tale of a colony nearby who have immeasurable healing powers. The team joins hands and use their combined psi-power to travel the astral plane to locate the healers. Windraven locates them! With mere hours left to save Long John the Rough Raiders blast off to find these mythical people!

When they arrive at the location they are greeted with intense visions of dinosaurs and demons attacking them! 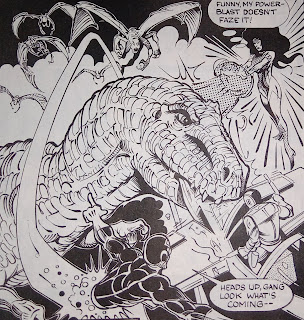 But Windraven realizes these are mere mirage meant to discourage visitors! Wow, that's even better than the Viper Car Security System!
https://www.youtube.com/watch?v=Ni5w49tOuNw

Windraven talks to the people of the colony and they explain when they heal someone it drains their lifeforce... if they heal Long John they will die! Chenna, an older healer woman volunteers to exchange her life for that of Long John's since he is a hero (and possibly a fast food fish mascot). 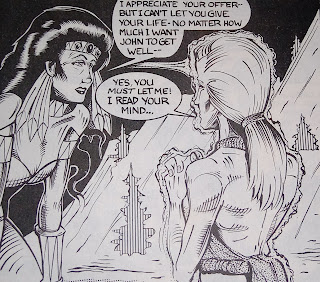 Chenna enters Long John's mind and heals him. He awakens having had an intense dream of falling in love with a woman named Chenna, his soul-mate. But he soon finds that Chenna was real and gave her life to heal him. John cries over her dead body. The End. Wow, that was a bummer.

The pencils in this one are credited to "Black Skull" which may be the late great Steven Hughes of Evil Ernie and Lady Death fame. Not positive though.

This one opens with half the Rough Raiders nowhere to be found. The remaining members search the headquarters to no avail. We cut to a penthouse overlooking Fifth Avenue in New York. Everyone is dressed like it's the '80's (even though the Windraven and the Rough Raiders are from the '90's). Inside Long John Lazer is beating up and sexually assaulting a woman. Wait... isn't this the hero from the previous story?! 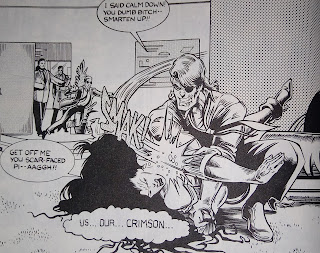 The woman hears voices in her head telling her to use her powers... and she does! 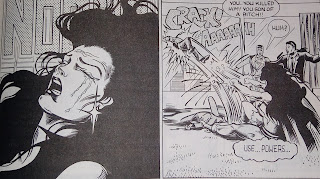 After blasting her attacker out of the window she begins blasting his goons with her might powers! They blast back! So much power being dispersed! Suddenly a cloud of smoke engulfs The woman who turns out to be...Windraven! The smoke clears and she is no longer in that posh New York apartment but in the middle of the woods with her fellow Rough Raiders and some strange beings. What's going on?

We find out that the strangers are a group of wizards calling themselves the Cult of Krimson Karma who have summoned the Rough Raiders to this forest. The Cult were trapped in the Red Plain that surrounds the Earth. From this prison they made attempts to call for powerful beings to come to their aid but could only reach their subconscious minds.

They decided to use dreams to create a fantasy situation for the Raiders which would perceive as reality. A shared false reality charged with emotions where they would be directed to use all their powers at maximum force to create a rift to shatter their prison!


The Cult explain they conjured a dreamworld set in the '80's because they wanted to make it as real as possible and that is the age they were most familiar with. I  KNEW wizards listened to '80's bands like Dio and Mercyful Fate!

The Cult leaves our heroes to deal with the aftermath of their shared fantasy where one team member attempted to rape another and they all basically killed each other. Damn, and I thought the end of the previous story was bleak. 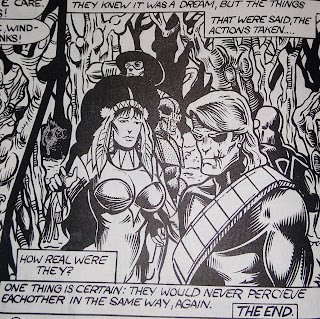 Final Story! (titled The Origin of Iron Cupcake)
This one is just a straight up '90's action story with lots of boobs... 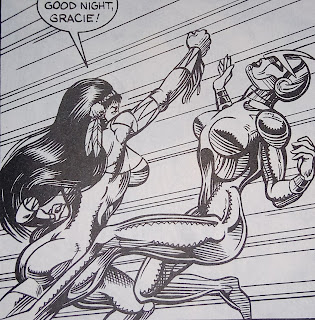 But suddenly in the middle of the brawl a few female members of the Rough Raiders are zapped away!

During the process their clothes were burnt from their bodies so they break into a clothing store and find something to wear. Apparently is was an S&M specialty store because they emerge looking like every typical '90's bad girl comic character. 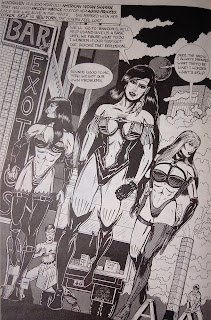 Apparently the story is continued in a comic called Windraven SP Sex and Death #0 but I don't think it was ever published.

Thus ends the stories in this comic and as a bonus there is a great pin-up section including this one by Rob Liefeld and Craig Storman from way back in 1986! Speaking of pin-ups I'm excited to announce the first guest pin-up art for The Bewildering...
it's Long John Lazer as depicted by Eric Shonborn! 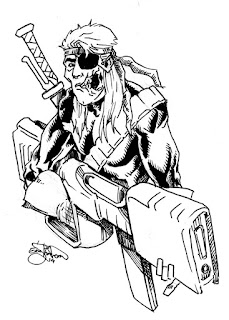 Well, not the best comic I've ever read but it was interesting in the way it took the classic super story and gave it a dark spin. Decent art throughout (though whoever designed the logo just ripped it off of Wolverine comics from the same time).

I probably wouldn't pick up a second issue but I couldn't find evidence that one even exists so I guess that solves that quandary.

Join me next month when we dive into... 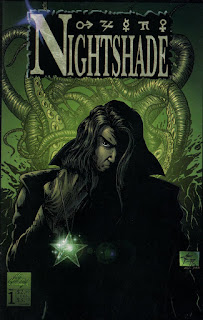 Posted by Veggiedogsaturn at 8:33 AM No comments: