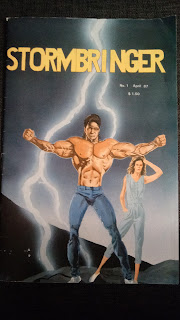 Johnny stands on a deserted bridge considering the situation. He goes over it in his mind to try to make sense of the events of the last two weeks. And what a doozy of a fortnight he's had!
It all started when Johnny left the movie theater. As he was heading to his car he was struck by lightning and given amazing abilities... the abilities of Stormbringer!  He now possessed the powers of strength, flight and the most amazing power of all... the ability to light matches with his mind!
That could come in handy when camping. 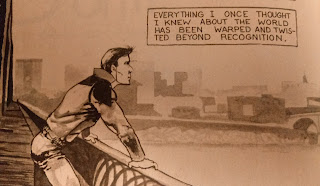 Yesterday Colonel Sinclair showed up at his apartment and asked him to go to Washington, D.C. to meet with someone important. Who could that be? Maybe Johnny's girlfriend Tammy will know! 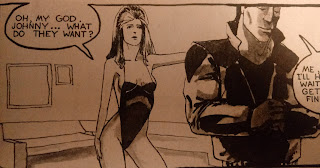 But Tammy has no idea. She just wants to get her rocks off. And she gets her wish! There are a few awkward panels of her posturing lewdly before the inevitable sex scene.

Johnny, freshly spent, flies to D.C. to meet this mysterious figure. As it turns out... it's President Reagan! The Gipper informs Johnny there is a whole program of super powered folk called Man-Plus and that he will be its newest member. 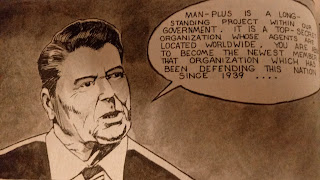 They fly Johnny out to New Mexico to their secret underground training base. 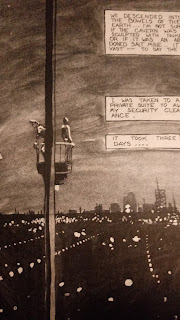 There they will test his powers to make sure he can be a part of the team. Good luck Johnny! 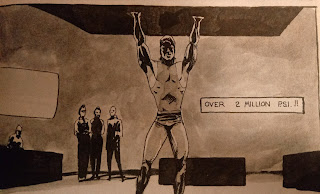 Johnny impresses them with his display of strength! He truly is a tough son of a gun...

But the scientists need to make sure he can also "take a punch" so they have him stand in the middle of the desert... and they drop a frickin' nuke on him! 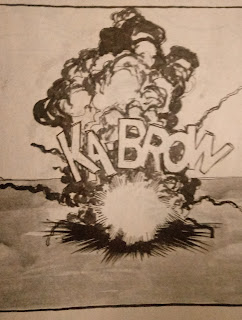 If he doesn't have the strength of Superman it'll be bedtime for Bonzo for sure!
As luck would have it, he survives so they fit him with a new costume. He poses sexily. 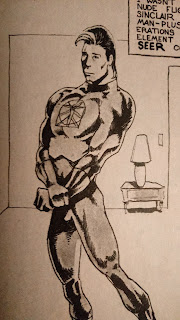 Johnny is introduced to The Seer, the protein based sentient computer that will be giving him orders during missions. In a creepy moment, Seer whispers "Help me Johnny..." as he is led away from the computer. Foreshadowing!

But soon Johnny finds himself on a mission to stop a Russian submarine from attacking the U.S.S. Carl S. Vincent air craft carrier. This is maybe the weirdest part of the comic where several panels contain actual photographs of jets and helicopters instead of drawings of them. It's off-putting. 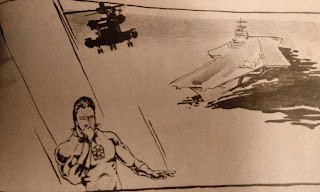 Johnny refuses his orders to destroy the sub full of Russians and instead grabs it from the water and gently sets it to rest on the Carl Vincent like a mosquito on the lid of a Frito Lay cheese dip floating in the bathtub. He hopes that Man-Plus will forgive him for not following orders.

He decides to fly back to Chattanooga, Tennessee to see his lady. But when he walks in it seems that there has been a struggle in Tammy's apartment. That or she's a terrible housekeeper! 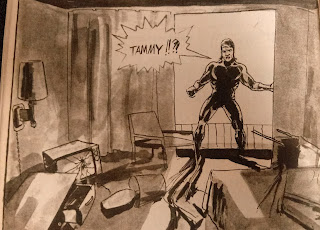 Has Tammy been kidnapped? Can Man-Plus possibly be behind this shocking turn of events? Maybe we can find out in issue two! According to the internet there are three issues total of Stormbringer out there so dive into those discount bins when you can!

This wasn't a bad book, really. I expected it to be terrible for some reason but the worst criticism I can give it is that I've read lots of comics like this which came later but were perhaps way better. "Adult" super hero stories full of sex and introspection. Not typically my favorite genre, by the way. I prefer it when the sex and the introspection are kept seperately.

That said, it was actually a well paced enjoyable read with decent artwork. So, good job William! I will definitely pick up the other two issues if I find them while scouring dollar boxes in the future.

I didn't feel inspired to draw Johnny for some reason (maybe because it seemed too obvious to do so) so here is my depiction of our 40th president. 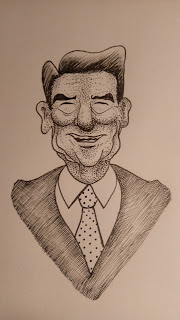 So, this post marks the one year anniversary of The Bewildering! Thanks for joining me on this adventure into the world of obscure comics. Hopefully you'll stick with me as I really enjoy doing it!

My apologies for the lateness of this post (for those of you keeping a close eye) but I assure you another review is right around the corner. Join me back here soon and share in the glory of...
Savage Ninja! 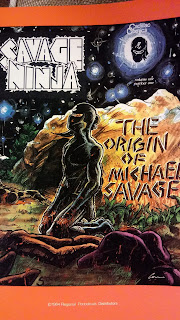