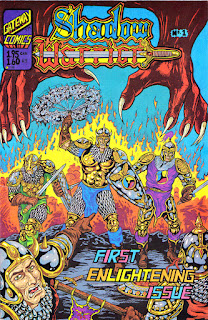 
Recently I was scouring the dollar boxes at a local shop called Bell, Book and Comic and discovered this exciting looking book. The cover is so full of energy and color that I simply couldn't wait to see what it was all about! So without delay let's dive into Shadow Warrior #1!

Kaminarr, once a knight called a Thane (peace keeping protector of the balance) became greedy and discontent. So much so that Mordann, the Dark One took notice from his distant hell and seduced Kaminarr by promising him supremacy over all if he would only unleash a reign of darkness over all the land and allow Mordann total dominion. Our story begins after Kaminarr has destroyed every house of the Thanes except for the Vullon and has just ordered an attack on that last vestige of honor in the village of Kirchen. 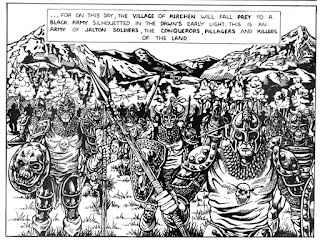 Kaminarr's cruel forces encircle the village and prepare to unleash destruction upon it. Suddenly, a ball of light appears in the woods and who should appear but... Moon Knight?!? 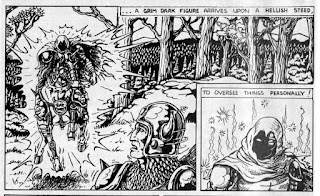 Oh... wait, no... that's Kaminarr! He just happens to look exactly like Moon Knight. General Grunn begins sweating and looks visibly shaken at the appearance of his demonic commander.
Kaminarr orders the attack and tells his men to meet him at the stronghold once the village has been secured. He threatens his general, telling him to pray that all goes according to plan for his own sake! General Grunn then walks away quietly and goes over to speak to his sergeant. It's a weird little moment where they have this brief aside. 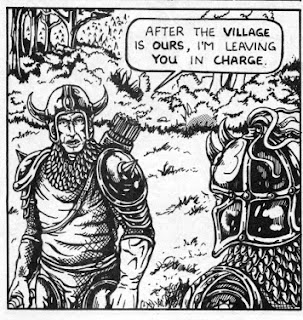 Sergeant Callo probably sees it as a promotion but General Grunn is basically putting him in line to face Kaminarr's wrath if something goes wrong. It reminded me of a little human instance from a Coen Brothers film where suddenly things get less serious for a moment of quirky interaction. 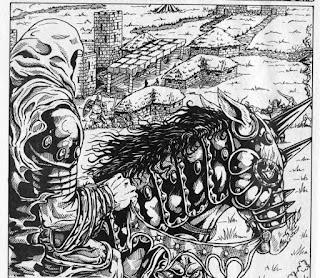 But then we get this great shot of Kaminarr overlooking the village as his forces advance on its unknowing populace. This might be a good time to mention that I think the artwork in this book is absolutely amazing. Just look at that horse! I honestly really love it.
We cut to a scene a few hours south of the village at Eskern Keep where the last of the Thanes dwell. Inside the kingdom's walls two men are going about their daily training. 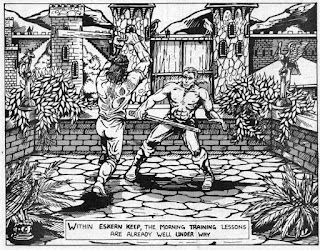 The younger of the men, Tezzarak, is summoned to speak with his father, Aaraim, Ur-Lord of Eskern Keep, in his throne room. Aaraim tells his son that the balance has long been tipping in favor of the darkness heralded by the traitorous Kaminarr. He continues to explain how the demon Mordann has perverted Kaminarr to do his bidding. 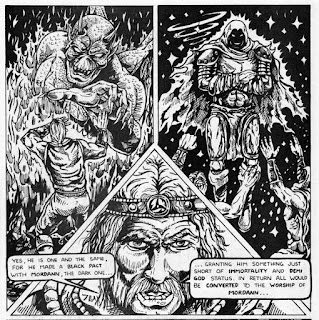 Tezzarak suggests they raise an army to defeat the forces of evil who are no doubt coming for them but Aaraim informs his son that Kaminarr's forces are too great in number to be overcome by physical force. They must admit they know not how to combat this terrible foe.
Just then a knight rushes into the throne room to tell them the nearby village is under attack. 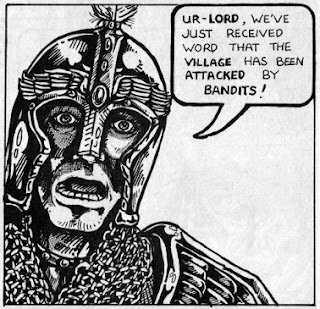 Aaraim tells his son to lead the Thanes in pursuing the attackers, thinking them to be mere bandits who are looting the village of Kirchen instead of the very forces of darkness he has just been warning his son about!
Tezzarak's younger brother Jerrid walks up as they are suiting up to leave. He wants to go with them but is told that the journey is too dangerous for an inexperienced swordsman like him. Jerrid's mom steps in and makes the final decision. Jerrid will stay behind with his parents.

Tezzarak tells his brother to stay and hone his skills as a swordsman so that no one will be his equal. Jerrid thinks to himself that someday he'll be a great warrior that none shall defeat! I have a feeling if this series goes on that Jerrid will come into play as a pivotal character in the war against the darkness...but I guess we'll have to wait and see! 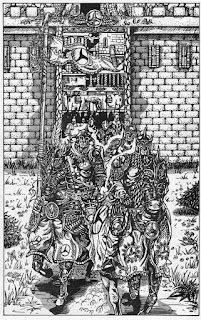 We then get this amazing splash page of the knights riding out of the castle walls to go defend the villagers. Awesome!
But they are being watched from the nearby woods by unseen forces as they ride towards the village. Just as they reach the outskirts of Kirchen they split up to encircle the village and survey the scene. But little do they know that Kaminarr's dark army are about to unleash an attack! 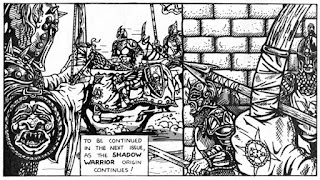 Will the knights fall to Kaminarr's black army of Jalton soldiers? You'll have to find out in issue two... which according to all of my research unfortunately never saw the light of day.
It's too bad as I'd love to see how this story unfolds. It's a decent story with good character development and as I mentioned earlier I think the artwork is excellent. My only complaint is that the cover made the lofty claim that this issue would be "Enlightening" and I feel like I'm just as dumb as I was before I began reading it. I guess there's no truth in advertising... even in Canada.
But speaking of that cover, hats off to Bob Caldwell and Bob Turner (colorist and color separator) who did an amazing job! I usually prefer black and white comics to color ones but can't help but wonder how fantastic this comic would've looked if they had gotten their hands on its entire contents. Great work Bobs!
And as always I drew a character from the story. Here's the fearful General Grunn. 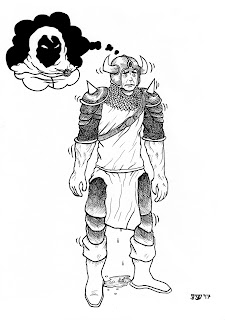 Hope you enjoyed this peek at Shadow Warrior and that you'll come back next month when we investigate another small press wonder...Jim Nastics! See you then! 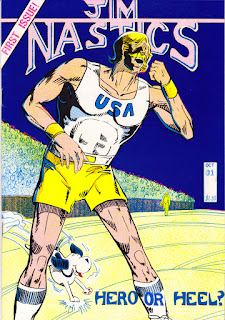