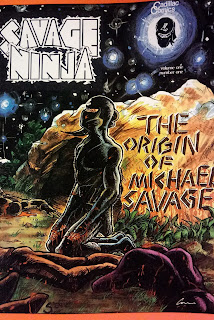 Our comic opens with a splash page immediately following a ninja battle. The image of a ninja kneeling amongst a field littered with bodies. The same image, in fact, that appears on the cover of the book. Which, I have to say, is a little lazy.

Michael Savage is the kneeling ninja who is attempting to gather his power to survive after the injuries he has sustained in battle. His mind wanders and rests on a childhood memory. His mother is dropping him off to study Tai Chi with the Sensei. Although Michael is awed by the swords and dragons on the walls he is also very afraid and begins to cry.

So, I want to say right off the bat, I think it would've been more interesting to see more panels of the big ninja battle (there is only one) and a few less of a child crying as he walks around a Tai Chi center with his mom (there are thirteen). Maybe I'm crazy. 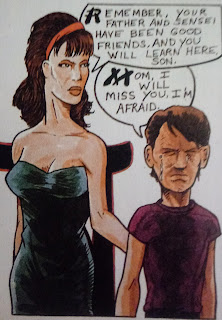 Like most kids who cry a lot Michael is eager to learn to fight, but the Sensei informs him he must first learn about his relationship with Mother Nature. He also suggests learning some creative pastimes and introduces Michael to his son David.

We then are treated to six more panels of Michael looking sad as his mom finally decides to leave him at the Tai Chi center. Apparently it's for a long time, not just the afternoon.

Lee, the man servant, prepares a lunch for them all and they sit down to talk about life at the center.
But first Michael mentions how he and his mother have never been separated and looks sad again.

David changes the subject and says Lee is like an older brother to him. Lee seems cool. 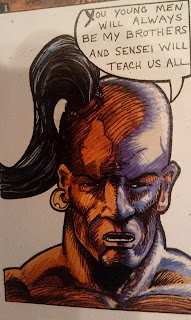 They talk for awhile and then the Sensei informs them it is time to retire for the night. He tells David to lead Michael to his room.

You'll never believe this but on the way to his room Michael thinks to himself about how much he misses his mother. Dear Lord.

David shows him to his room and tells Michael that he welcomes his friendship. But Michael says he is tired. Tired and...(sigh) that he misses his mom.

But night passes and in the morning Michael is treated to a beautiful view from his window. 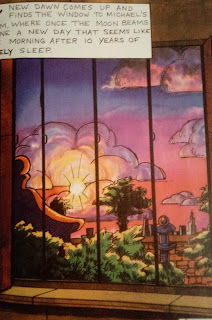 Maybe a good night's sleep is all Michael needed to snap out of being such a wuss because we're now treated to a montage splash page of him kicking ass! As time at the center passes Michael becomes quite the fighter and by the end of the page he's knocking guys into the next panel! Who's crying for their mommy now?!? 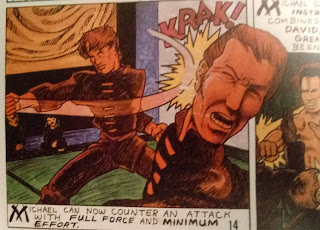 This memory brings us back to the present where Michael is waking up from the haze of the injuries of battle. He realizes he's got some broken ribs and torn muscles but being the bad ass ninja he is he decides to walk it off! 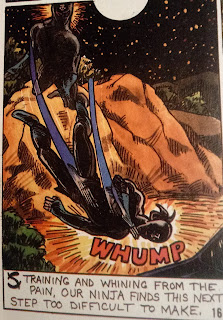 If only his mom was here to pick him up. Nevertheless... Michael staggers through the darkness and up a flight of stairs. At the top of the stairs is a door which opens to reveal... Lee! Lee takes him inside for medical treatment and then cleans the stairs. 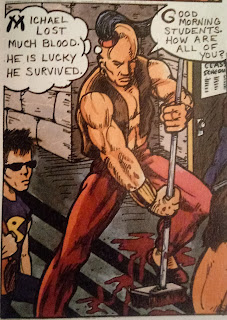 While Michael's wounds heal David does some detective work. He discovers who lead the group of ninjas that almost killed Michael. The two men decide Michael has healed enough from his wounds and decide to track down their new nemesis, Fantu. They make it to their enemy's lair and climb stealthily over the gates. Inside the yard they are attached by Fantu's Doberman but they kill him and bust in through a window. They then throw ninja stars and daggers into the faces of the thugs inside! 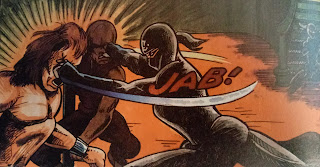 But Fantu lands a heavy blow of his sword into David!

Michael, seeing his friend's injury, lashes out against Fantu and rips open his chest cavity with his poison laced clawed glove! Fantu lies there dying but manages to whisper one last decree... 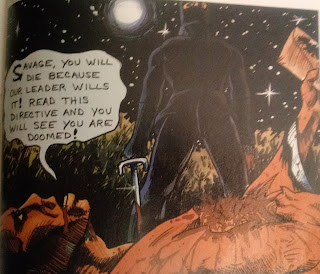 Michael looks at the hand written directive Fantu has handed him and thinks how familiar the handwriting looks. Michael picks up David's unconscious body and takes him back to the Tai Chi center to treat his wounds. The next morning Lee has prepared breakfast and is serving it in the garden when an unknown assailant attacks, throwing a shuriken right at Michael Savage! 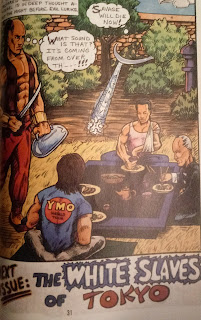 The End! Next issue The White Slaves of Tokyo! Hot Dog! Was this the first full color comic we've talked about here at The Bewildering? I think it might've been... how cool!

Another cool thing about this comic is that it is sponsored by a company called East West Markets Exchange Inc. that makes all kinds of sweet ninja clothing ware and equipment! There are a couple of ads for them in the book. Here's the one on the back cover! 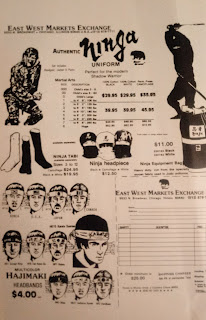 And here is my depiction of the man servant Lee as an '80's action figure: 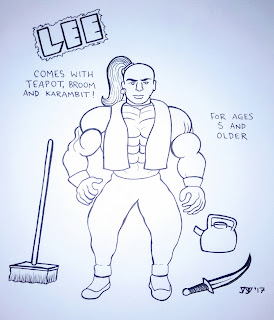 According to comics.org Savage Ninja never reached issue #2 so we may never know who Fantu was working for. But I for one hope it's Michael's mom. That it's her handwriting he recognizes on that document that Fantu gave him. She got so sick of him constantly crying when she stepped out of his sight for a minute that she decided to teach him a lesson by becoming his ninja nemesis! I don't know. Maybe it wasn't. Maybe it was Lee! Kind of convenient that he was just a short walk away from Michael when he was beaten to a pulp earlier in the story. Or...perhaps it is Michael's father. At the beginning of the comic it was revealed he was an old friend of the Sensei. Either way, pretty fun comic, flawed as it was.

In addition to story by Edward M. Mandel and art by Michael Carr the lettering was by R. Hansen and colors by Mark Smith. Good job fellas!

Let's hope next month's book is just as exciting. Won't you come back and join me for...
Existing Earth! 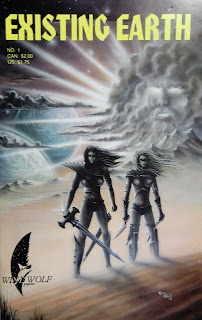