The New Adventures of Shaloman #1 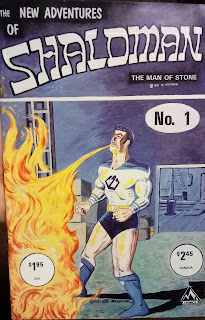 A fishing boat full of fresh carp pulls into the dock one warm summer night and the tired crew unloads their haul. But just after they do a couple of shady looking fellas sneak up and spray a chemical into the catch! 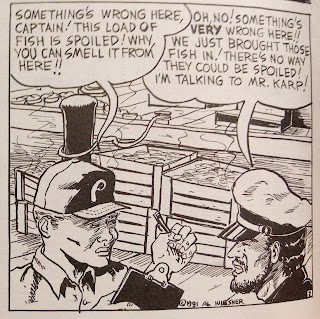 We then get a glimpse into the secret headquarters of L.A.T.K.E. (or the League of Angry, Tough Knocker Evil)! The group is gloating about the success of their efforts to ruin another haul of fish from the Father's Fish Company. Their plan is to use a Gelfite fish recipe to amass a fortune which will be used to get rid of their nemesis, Shaloman. And as if on cue... 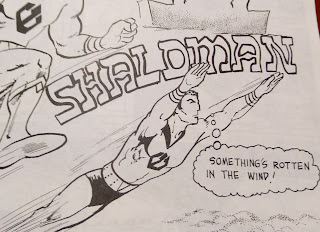 Our hero detects something fishy going on (groan all you want, I didn't come up with that one. It's in the comic!) and heads out to investigate.
He makes his way to the dock that night where once again some thugs are attempting to ruin a fresh haul of fish. 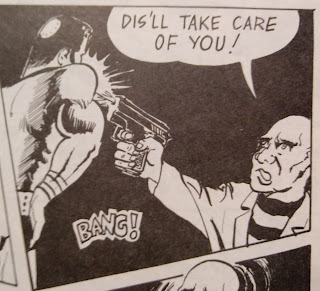 The thugs try to stop him but he clobbers them instead! Unfortunately Shaloman forgot to ask who the two goons were working for before he laid them out so he is unable to stop the plot at it's source. 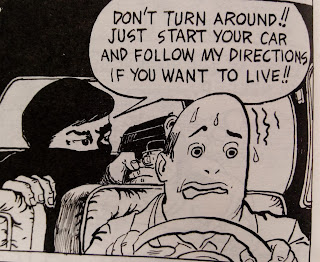 Mr. Karp, owner of Father's Fish is kidnapped by another goon and forced to drive to their lair!
There he meets L.A.T.K.E.'s mysterious leader, The Greaser!

The gang makes Karp try their Gelfite fish. Greaser tells him that he will start using their recipe and pay millions of dollars each month for the privilege. Karp asks for some horseradish and is given some of Dr. Shmek's homemade Haise Horseradish, which he claims is amazingly hot!

Karp tastes the fish and horseradish... but claims there's no kick to it. He tells them it might be worth ten bucks a month but certainly not millions.

L.A.T.K.E. is furious! But just then who should show up but our hero, Shaloman! 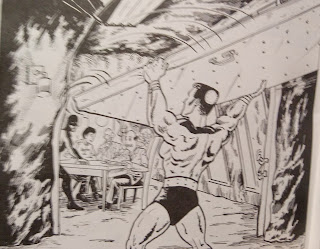 He busts in and kicks their asses! 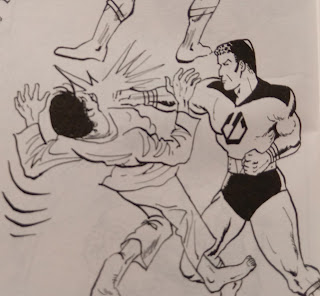 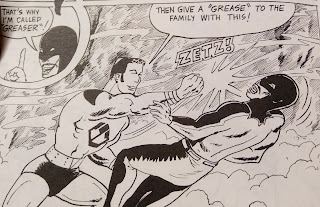 The Greaser escapes like the slippery devil he is but Shaloman saves the day by rescuing Mr. Karp and returning him to his office at The Father's Fish Company. Then Karp says he has to get their recipe because even if the horseradish was sub-par, the Gelfite fish was unbelievable! 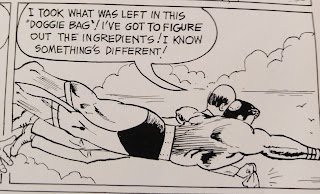 Well, there you have it. The New Adventures of Shaloman issue one. It was a decent read with reasonably good art and story. Nothing to blow your mind but a fun comic for kids for sure. Shaloman is known as The Man of Stone, The Defender of the Downtrodden and also The Kosher Crusader. Wow, that's a lot of nicknames!

There are several Shaloman comics out there (I have seen a few digging through boxes of comics) so if you have any interest in reading his adventures please do so!

Creator Al Wiesner said he wanted to make a positive Jewish super hero role model for kids and did so with his creation Shaloman (Shalom means "peace" in Hebrew).

Which reminds me of a joke. How does Moses make coffee? He brews it! Ha!

Anyway, here's a portrait of my favorite character in the book, Shaloman's nemesis The Greaser! 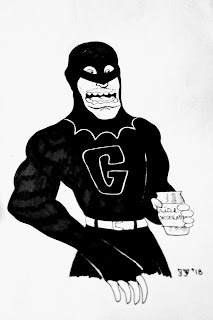 You have to come back next month to see what fantastical action awaits us all when we dive into Peter Risk Monster Masher #1! 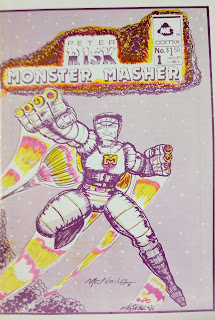 Posted by Veggiedogsaturn at 10:00 PM